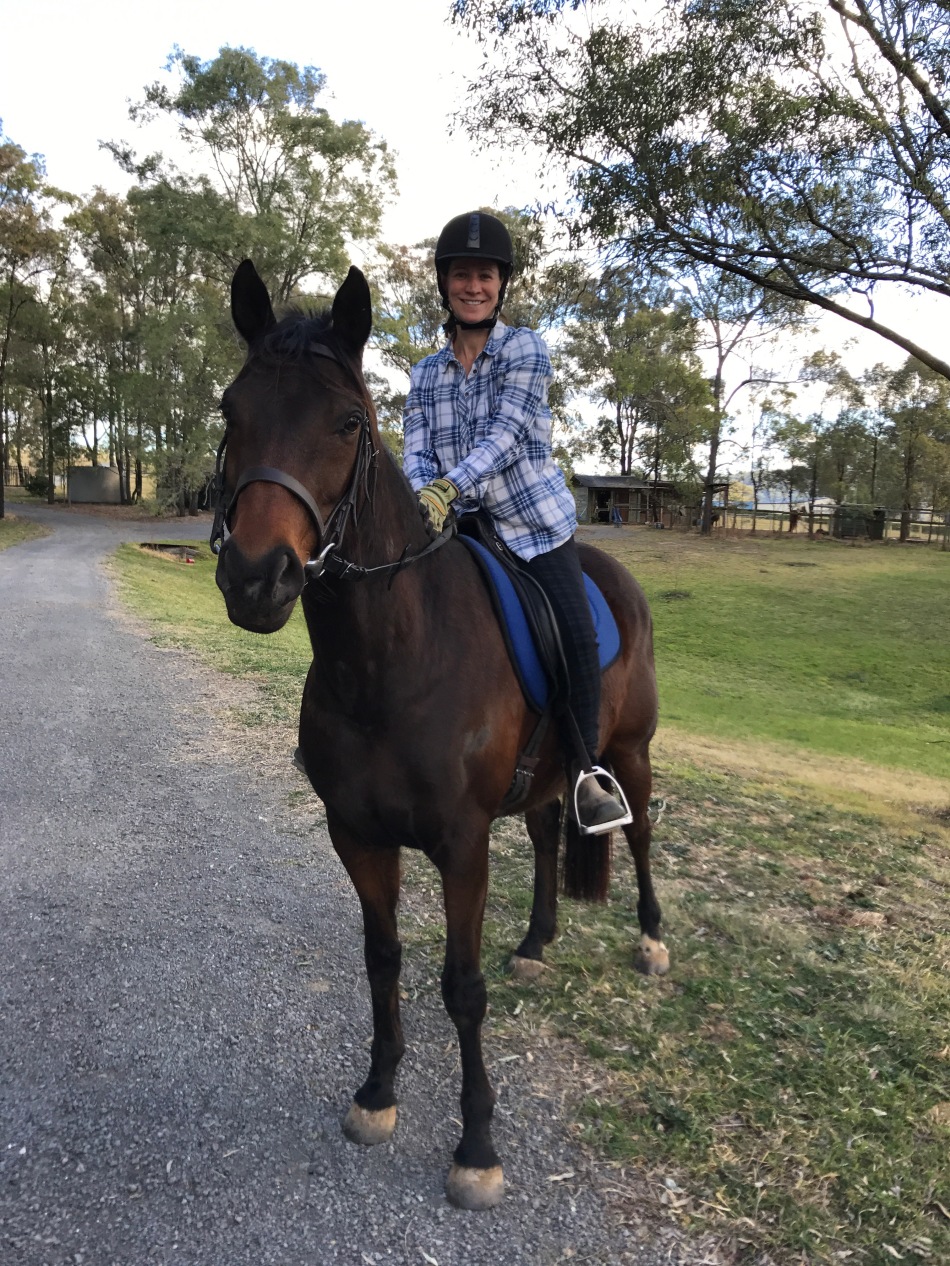 Our next-door neighbours used to breed horses, and their fine-boned riding ponies often came to the fence to chat to our motley crew. Among the little ponies in their rugs was a taller mare, unrugged, with bad Queensland itch, her pretty head held high with suspicion. She had a strap around her throat that allowed her to be caught once she was tempted into a stable then cornered. She didn’t like to be caught, and she didn’t want to be patted. But she seemed inquisitive, and when I talked to her she reached out her neck, keeping her distance, to take a carrot I had brought up for my own boys. My neighbour laughed, “She never lets me touch her like that.” They called her Elephant because she is such a big girl compared to their little ponies.

Last August he said he was going to get rid of her—shoot her—before the summer came and with it the return of the dreaded itch. She was 10 years old. She was unbroken. She was uncatchable unless tricked, and had hardly been handled. I couldn’t bear the thought that she would be shot because no one had even tried to see what she could do. She hadn’t even had a chance. My husband said, “You said you wanted a rescue mare. This mare needs rescuing.” He was right. I said, “I’ll have her.”

Once I got a headcollar on her, I walked her to our place—a nervous, dramatic journey—and installed her in the yard. She was anxious, and stressed. She could see and hear her family, but couldn’t get to them.

I took it slowly and worked with her in the yard for a month, just five or 10 minutes at a time. As soon as I could do it without scaring her, I took off that strap. It seemed a symbolic and powerful moment. We had to make it work. I named our new mare Ellie. It was her fresh start.

Every time she tried to do what I wanted, she was rewarded, mostly by me just leaving her alone and standing quietly for a moment, and later with a stroke, and we always stopped before it became too much. Ellie transformed from a horse who wouldn’t look at me, let alone be caught, to a horse who happily walked up to me and let me put a headcollar on her. Once I was confident I could catch her, I let her out with Tank—he’s quiet and submissive, and a good companion. Ellie ran back and forth in her new paddock, delighted with her freedom. But she isn’t silly, and she settled down quickly.

Ellie loves a pat and a cuddle, her head drops and her eyes go soft when I stroke her and talk quietly to her. She is eager to please and eager to learn. She enjoys company and seeks me out in the yard and paddock. She comes running when called. She is smart and interested in the world. She’s a sweet girl.

In the next month, I’d got her used to being groomed, then rugged (essential to keep the biting insects off her). I followed some exercises by Australian trainer Neil Davies, whose gentle ideas gelled nicely with my own thoughts. And so we were doing well with ground work, but I was just not experienced enough to start her under saddle. Ellie had come to me as something of a blank canvas. Though she hadn’t had anything done with her (bar getting her feet trimmed; she is great with a farrier), neither had she had anything bad happen, and I knew that if I was going to get someone to start her under saddle, I’d have to find someone who wouldn’t bash her or hurt her. If she was ill-treated from now, it was on my watch; my responsibility.

My friend Lucy suggested I get in touch with her friend Skye: we had all ridden together years ago. Skye is a genuinely talented, gentle and intuitive horsewoman and the perfect person to take my girl under her wing. And she did an amazing job. (As an aside, my neighbours were so impressed with Skye’s work with Ellie that they sent their 7-year-old pony stallion to her to be started and he’s going great guns; they are thinking of showing him this year).

The photos below are from my first ride on my girl at Skye’s place.

Working on the ground

I am now riding her at home, but we have much work to do. Small steps with my darling girl. Time has hampered my progress,  but I remind myself that it’s not a race. I often think what a waste that she was ignored for so long, she has blossomed with attention and love.

A recent ride with my girl

Our first ride back at my place

The experience of taking on Ellie has been so rewarding. In the first few days I thought I had made a terrible mistake, and I questioned if I had bitten off far more than I could chew. Like all things worth doing, it was a challenge. But gaining her trust and affection, watching her interest in her world grow, and giving her a second chance at life has made me really proud.

As a final note, I feel I should add that my neighbours had not neglected her, they just didn’t feel able to handle her. They are both in their sixties and she is a big mare. I guess time got away from them. It’s really their loss in a lot of ways. When Mrs Neighbour came to see me ride Ellie, she saw how cuddly and affectionate the mare is. I said she was a really sweet girl. “Yes, she is,” Mrs Neighbour said, “I didn’t think she was, but she is.” Everyone deserves a chance to shine.